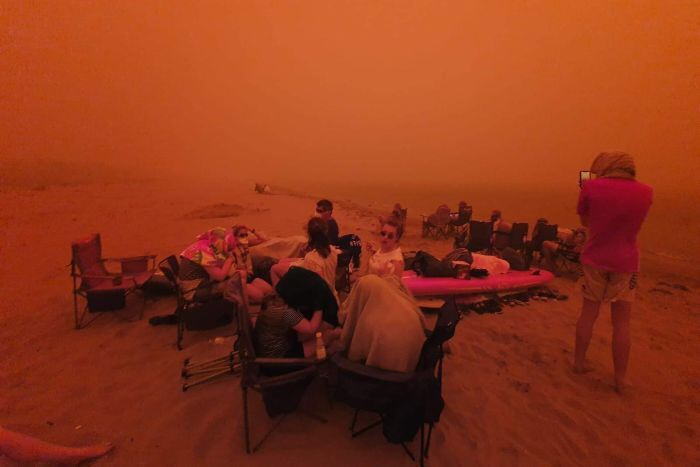 Rural Fire Service (RFS) volunteer Nadine Gaffney and her community spent three months fundraising for fire victims, but on the eve of handing out the funds, Facebook accidently cancelled her effort.

The Facebook fundraising page had more than $14,000 in the kitty from donors.

The disappearance of the funds stunned the small northern New South Wales community of Ewingar, which was one of the first areas hit by this season’s wave of devastating bushfires.

Ms Gaffney is exhausted, not only by the fires but by the bureaucracy of dealing with endless emails and phone calls to Facebook.

Her voices quavers and breaks as she tells the story.

“We were just about to distribute the money, and to have $14,000 lost, it’s really going to impact on the people who have lost their houses,” she said.

“We worked so hard to get this money, we need this money.”

The good news is that after a week of pleas for a review from Ms Gaffney to the social media giant, Facebook has apologised and agreed to reimburse the money.

When the ABC first contacted Facebook last week, the company responded saying there was nothing they could do about the issue.

But Facebook issued a statement to the ABC this afternoon:

“Thank you for bringing this to our attention. We recognise how critical these dollars are for communities affected by the bushfires.

“Our teams investigated the closure of the Ewingar Bushfire Recovery Fundraiser and determined that a notification error wasn’t allowing us to get the verification information we needed from the creator to ensure the integrity of the fundraiser.

“We apologise for this error, and we will cover the cost of the fundraiser, including payment processing fees, and disburse $14,108.26 to the fundraiser creator.”

Facebook’s head of communications, Antonia Sanda, also said “since November, there have been over 19,000 fundraisers for bushfire relief, and we have not had similar issues reported”.

The issue first came to light when Ms Gaffney began the process of collecting the funds to distribute within the community, and she received this message from Facebook:

“We’ve automatically cancelled your fundraiser and all the donations are returning to the donors with immediate effect,” the message said.

“I freaked out, I didn’t know what to do,” Ms Gaffney said.

“It’s really hard to find a way to get support,” she said.

“There was a form I could fill out so I did that, and I just said: ‘Please don’t return the money, it’s for a bushfire fundraiser’.

“Their response was they can’t solve it and that there was no way to stop the refunds happening.”

While fires still burn in the south of the state, in Victoria and in Western Australia, Ewingar locals are struggling to get back on their feet, three months after intense fires burnt through their homes.

The Long Gully fire in October killed two people, destroyed 13 homes, damaged 17 others and about 90 outbuildings were either damaged or destroyed.

Ms Gaffney does not have the social media following of those who have stepped forward of late and raised millions of dollars for bushfire victims.

She’s a community-minded woman who, together with her tight-knit community, went into overdrive to help during the fire and after.

So, what went wrong?

Ms Gaffney believes it was an identity issue.

Like many people on Facebook, she used her maiden name rather than her married name, so she could reconnect with people from school.

Ms Gaffney suggests that when it came time to distribute the funds, Stripe could not reconcile her two names, and the fundraising effort was automatically cancelled.

She says people should know the pitfalls.

“There’s a concern, obviously, that a lot of people are setting up fundraisers that are going to face this issue,” she said.

“If Facebook isn’t telling them what the problem is, and they they’re doing everything they’re being asked and then that money is being taken away, that’s just a really, really awful thing to be happening.”

The ABC also reached out to several government authorities to find out where the responsibility lay for resolving social media grievances.

In December, a government inquiry recommended running a pilot for external dispute resolution for consumers, businesses and digital platforms.

But at the moment, it seems such grievances fall through the regulatory cracks when it comes to the digital world.

As an RFS volunteer, registered wildlife carer, bushfire survivor and community stalwart, Nadine Gaffney manages each day since the fire by putting one foot in front of the other.

She believes no-one should have to go through the added trauma she’s endured trying to recover the bushfire funds.

“They [Facebook and other social media platforms] need to fix the system because I can’t be the only person this has happened to,” she said.

While Ms Gaffney welcomed the resolution, she only became aware when the ABC contacted her this afternoon.

“This is a great outcome but I am disappointed that it took the media to get this result,” she said.

“It did feel like they would have wiped their hands of the matter but it is a huge relief that this money is coming back to the community.”